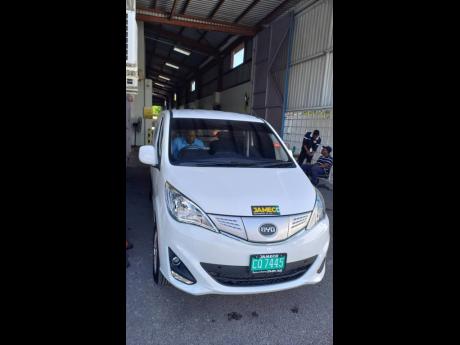 Carreras Limited, the country’s leading marketer and distributor of cigarettes and tobacco-related products, is now one of the first companies in Jamaica to adopt electric vehicles (EV) in its commercial fleet.

The company rolled out the first of five commercial panel vans on Monday, just 10 days shy of its 60th anniversary which will be celebrated on August 18.

Managing Director Raoul Glynn said that the transition to EVs is a very fitting way to embark on the company’s diamond jubilee. “The initiative was driven by the company’s environmental, social and governance mandate of creating ‘A Better Tomorrow’ by reducing the health impact of its business, while contributing to a sustainable future,” he said.

Glynn further stated that “research has shown that utilising these vehicles would increase our delivery capacity by 300 per cent, decrease our fleet operating cost per year between 30 and 40 per cent and reduce our CO2 emission by three CO2 tonnes per year, per vehicle”.

Carreras’ transition to EVs started in 2021 when the company entered a partnership with JAMECO, a local vehicle supplier, to procure the vehicles.

The vehicles were retrofitted in order to be compliant with the global Environmental Health and Safety requirements and will be utilised by sales and trade marketing representatives that are assigned to the Kingston routes.

Glynn added that the drivers of the EVs have all been fully briefed on the use of the vehicles with the assistance of JAMECO and XERGY ENERGY, who are consultant partners to the Government of Jamaica.

He said the company currently has 85 internal combustion engine vehicles, but by the year 2025, he expects that the entire commercial fleet will be replaced with EVs.

“EVs are the way to go because they are increasingly becoming an environmentally and economically viable alternative to internal combustion engine vehicles,” Glynn said.

With this move, Carreras will join the wider British American Tobacco Group’s growing list of global markets, namely the USA, Australia, Colombia, Germany, Mexico, and the Netherlands, where the transition of trade and operations fleet are well under way.